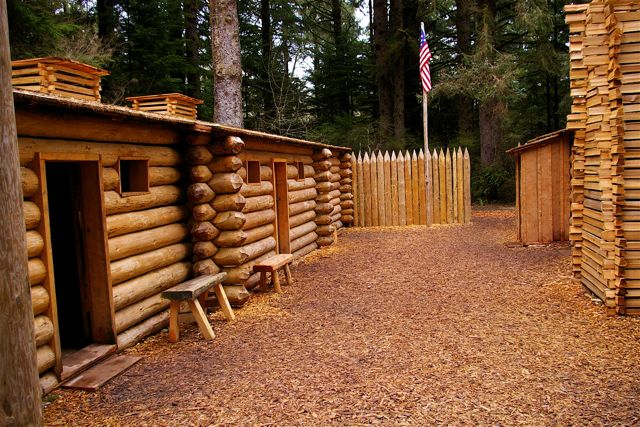 FORT CLATSOP NATIONAL HISTORICAL PARK, Follow signs from Highway 101 in Warrenton.   Hours vary by season; museum opens at 8 am. 503-861-2471.   The first habitation built by Americans along the Pacific Coast, Fort Clatsop was built by the Lewis & Clark expedition. The fort is furnished as it may have been in the 1800s, with wooden bunks and tables and park rangers provide programs showing what life may have been like for the explorers. The fort also hosts a visitors center which included exhibits and audio-visual programs, more Lewis & Clark in Oregon Bicentennial information and Thomas Jefferson's role in the Lewis & Clark Expedition. 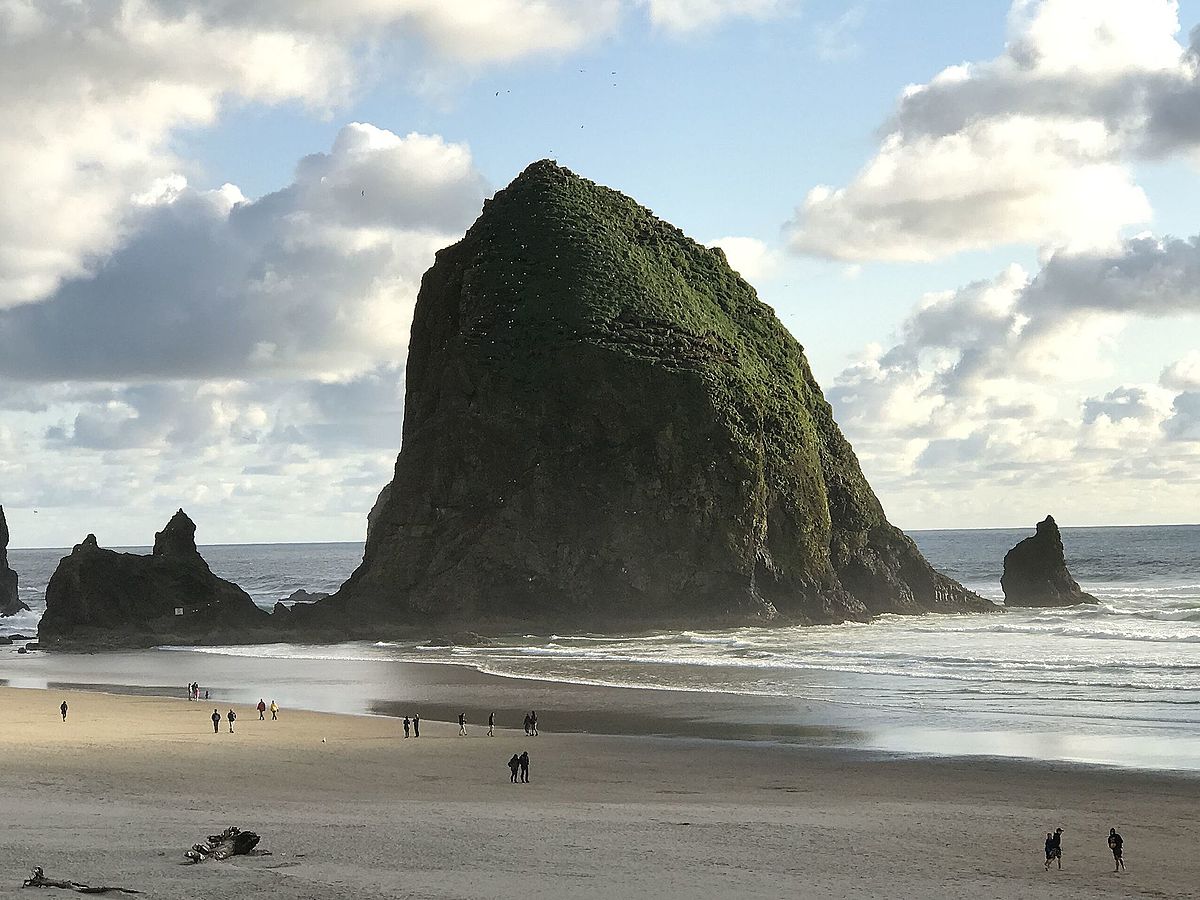 CANNON BEACH is a popular coastal resort town located in an area of natural attractions such as Haystack Rock, a 235 ft. high offshore seastack, Ecola St. Park, with excellent hiking opportunities, and miles of wide sandy beach directly adjacent to Cannon Beach. Cannon Beach has developed a vibrant arts community and with a stroll through the four block long village center you can visit numerous galleries, as well as restaurants and shops of all kinds in a well preserved coastal ambience.

ASTORIA, city of 10,000 is the oldest American settlement west of the Rockies and sits on the south banks of the Columbia River.   Surrounded by water, forests and scenic beauty, with a view of the Pacific Ocean and miles of sandy beaches best viewed from Astoria's historic Column.    Astoria is a heritage tourism destination with many historic sites in the city and surrounding area. 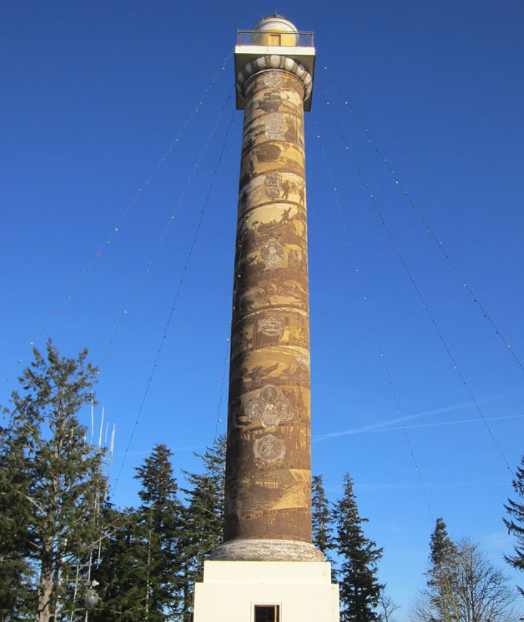 THE ASTORIA COLUMN is a major landmark rising over the city of Astoria.    After the city’s centennial in 1911, specific plans began to take shape for the tower, including a histogram depicting area events and inspired by the construction of the Eiffel Tower in Paris a decade earlier.   The 125' tower was opened to the public in 1926 and provides a spectacular view of Astoria and the Columbia River from the viewing deck. 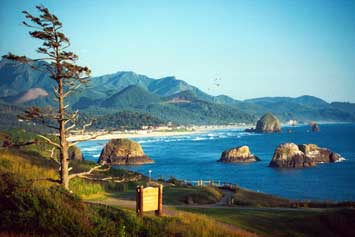 ECOLA STATE PARK, located between Cannon Beach and Seaside the park covers over 8 miles of coastline with views of Cannon Beach, Haystack Rock, Tillamook Rock Lighthouse and the Pacific Ocean.   Ecola State Park is a prime spot for picnics and special gatherings, with acres of  Sitka spruce forest and trails for hiking, including a segment of the Oregon Coast Trail and the Lewis & Clark trail over Tillamook Head. 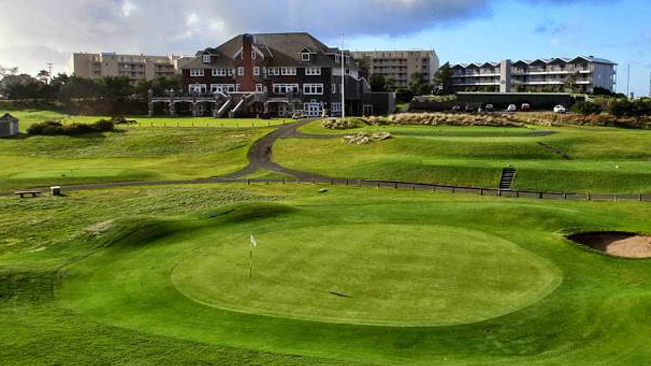 GEARHART GOLF LINKS,  an 18 hole public course located in Gearhart, officially opened in 1892 and is the oldest course in the Pacific Northwest, with an ocean side Scottish golf links design. 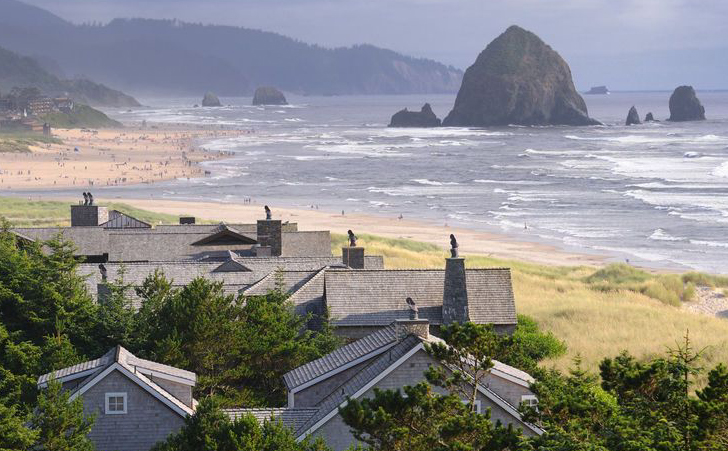 CANNON BEACH HISTORY CENTER & MUSEUM, 1387 South Spruce Street, Cannon Beach, OR 97110 503.436.9301 ..Step into a Native-American longhouse and imagine the furnishings and garments you'd create from cedar, shells, and stones.... Imagine an encounter with the Pacific's most treacherous shoreline from a Spanish or English explorers' ship... Imagine the soreness of your seat back when travel to Cannon Beach from Portland included steamboat, train, and stagecoach rides and took an entire day... Relive the anxiety of World War II, when residents of Cannon Beach were "blacked out" for fear of invasion, and soldiers patrolling the beach enforced a strict curfew...

OSWALD WEST STATE PARK,  has nearly 2,500 acres with several miles of hiking trails, including an easy trail to the Short Sand Beach and scenic ocean viewpoints

A 13-mile stretch of the Oregon Coast Trail weaves its way through the entire park, starting at the community of Arch Cape and extending south towards the town of Manzanita. Two prominent headlands, Cape Falcon and Neah-kah-nie Mountain are included in the park and offer great hikes. 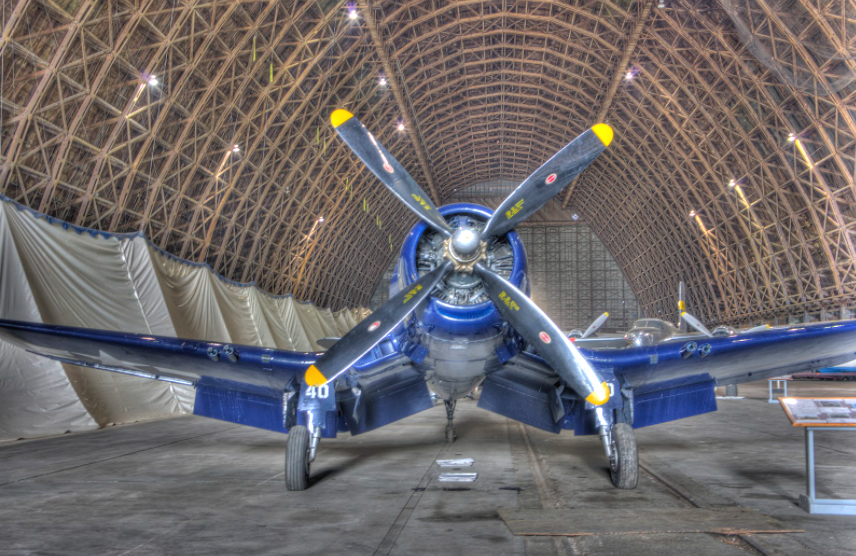 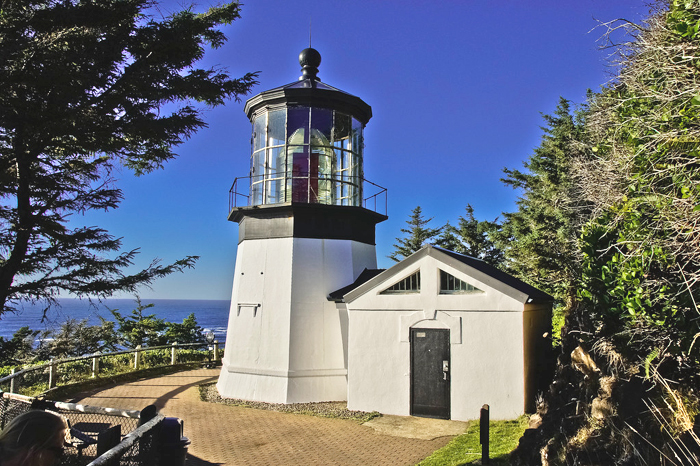 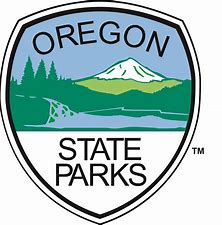 OREGON STATE PARKS are among the most scenic in the world, with hundreds of campgrounds, picnic sites, day use areas, hiking and more along the Oregon Coast and throughout Oregon.

COLUMBIA RIVER MARITIME MUSEUM, 1792 Marine Drive, Astoria. 503-325-2323.   Open daily from 9:30 am to 5 pm. Walk through the bridge of a World War II warship and look through the eyepiece of a submarine periscope. The museum’s 24,000 square feet of exhibit space is home to canoes, sailboats, warships, as well as artifacts, tools, equipment and fine art illustrating America’s maritime past.

FORT STEVENS STATE PARK, originally commissioned as a Civil War fortification in 1863 to guard the Columbia River, Fort Stevens is now a state park with a museum featuring military artifacts, guided tours, a Chinook longhouse replica, interpretive displays, movies and living history demonstrations. The 4300 acre park is the largest state park campground in the nation with 596 campsites.   Call 800-452-5687 for reservations.

ASTORIA HERITAGE MUSEUM – This museum offers some history to the Astoria area, specifically Clatsop County. The features include permanent exhibits interpreting past history, natural history, geology, Native American artifacts, early immigrants/settlers of the region, and important nautical events. Open daily, summer (10-5), winter (11-4), and $3 for adults, $2 for children, and $1 for youth. Located on 16th and Exchange, call 503-325-2203 for more information.

UPPER TOWN FIREFIGHTERS MUSEUM – This museum accommodates an extensive collection of firefighting equipment dating from 1977-1963. Astoria has a history of traumatic misfortune with fires, and here it is told through photographs and artifacts. It is located on 30th and Marine Drive, with no cost.

SEASIDE AQUARIUM, 200 N. Promenade, Seaside. 738-6211. Since 1937, the Seaside aquarium has thrilled audiences with its many varieties of sea life.   See a variety of deep sea wonders in its 35 tanks.   You can even feed the seals!

BLUE HERON CHEESE CO. is located one mile north of Tillamook, on Highway 101 1 block north of Safeway and 1 mile south of the Tillamook Cheese Factory. The Blue Heron French Cheese Company features cheese and wine tasting, gourmet Oregon food tasting, Delicatessen and gift shop, espresso and fine chocolates and barnyard animals for the kids. Open daily from 8 am to 8 pm in the summer and 9 am to 6 pm in the winter. Call (503) 842-8281 for more information.

TILLAMOOK COUNTY PIONEERS MUSEUM. Located at junction of US Highway 101 and State Highway 6. Established in 1935, the museum now boasts of over 35,000 artifacts including guns and Indian artifacts, children's toys and dolls and other artifacts from the 1800s. The museum library is open daily from 8 am - 5 pm for people wishing to research using any of the library's many books, family files, old records and a large photo collection. The museum is open Monday through Friday from 8 am to 5 pm and Sundays from 11 am to 5 pm.

BIRD WATCHING AT HAYSTACK ROCK, A favorite spot of many birds is Haystack Rock, the monolith of Cannon Beach. Pelagic Cormorants, Pigeon Guillemots and the Western Gull may all be seen on Haystack Rock. From April to August, the Tufted Puffin may be seen nesting in burrows high on the grassy area on the north face of the rock. For more information, contact the Haystack Rock Awareness Program by calling Cannon Beach city hall at 436-1581.

LATIMER QUILT AND TEXTILE CENTER Located at 2105 Wilson River Loop Road, Tillamook, OR 97141. The center restores and preserves quilts and textiles, features classes and exhibits in diverse aspects of textile arts, and an extensive collection and library for viewing and researching. Open Sunday 12pm-4pm, Tuesday through Saturday 10am - 4 pm, closed Monday.

FLAVEL HOUSE MUSEUM, a Queen Anne Style Victorian Home, built in 1885, embraces its period furnishings that appear to be untouched, and present the same atmosphere in Astoria during the turn of the last century. The decorative exterior illustrates hipped roofs, balconies verandas, and a three-story octagon tower, all restored to its original form. Open daily during the summer, May-September (10-5), and in the winter, October-April (11-4). $5 for adults, $4 for seniors, and $2 for children, located on 8th and Duane, please call 503-325-2203 for more information.

BUTTERFIELD COTTAGE MUSEUM, 570 Necanicum Drive, Seaside, OR. The cottage, built in 1893, and since been remodeled as a 1912 beach cottage. The cottage is home to a Fourth of July gala featuring live jazz, games, cake walk, bingo, food booths, raffle and silent auction, as well as gingerbread Christmas affairs during December.

ASTORIA CHILDREN'S MUSEUM, located on second story of Uppertown Firefighters Museum at 30th and Marine Drive in Astoria. 503-325-8669. Open 10 am to 2 pm Wed-Fri, 10 am to 3 pm Sat. This museum will delight children and adults with its nautical theme area, child-sized grocery store and "Creative Station" for arts and crafts. For toddlers, there is a carpeted play area and a puppet theatre as well as special toddler times from 11am-nooon on Mondays and Thursdays. Admission is $3.00 per person. For the price of one admission, kids can not only view firefighting history in Astoria, and try on firefighter's helmets, boots and turn-outs, but enjoy the Children's Museum too!

BIKING THE OREGON COAST, traveling the Oregon Coast by bicycle is becoming more and more of a popular way to see the coast. It is advisable to travel north to south in the summer months as there is a steady north wind, which works as a tailwind. Scenic state parks with camping and/or picnic sites dot the 300 mile route from Astoria to Brookings.

SOLVE has coordinated beach cleanups along the Oregon Coast since 1984.   Each year the Spring Oregon Beach Cleanup in March and the Beach and Riverside Cleanup in September draw thousands of volunteers. You can be a part of keeping this tradition going, visit www.solveoregon.org for more details!